You know that sick smoky look you have seen many people on TV and on the streets rocking? That is called a fade
Sometimes subtle, sometimes striking, a fade is essentially a next-level short back and sides. Instead of going drastically from long to short hair, fading allows you to have a more natural and clean look. It has also been described as a “spray-paint look”.

A fade is a masterful cut that involves subtly blending hair lengths – with a clipper, scissors, or often both – to give the hair at the back and sides of the head a smoothly graduated or ‘faded’ effect. Thus the name.

If you only learn one thing about barbering terminology, make it this (and these).

Clean, classic and versatile, the taper fade is always a good option. It can be easily combined with 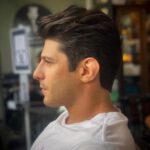 ANY haircut to make it look more natural and crisp. It’s sharp, but not severely so, meaning it’ll work well at your work desk and during your time off.

The taper starts from the nape of the neck and extends to the parietal ridge, gradually getting darker as it gets higher.

Who’s it for? – It is a great look for someone who needs a smarter haircut and wants it to look slightly more natural. It can be used as the basis for several different styles up top from a neat scissor crop to longer, more styled looks.

TLess subtle than a taper fade, a low fade shows a bit more skin as it goes higher up, 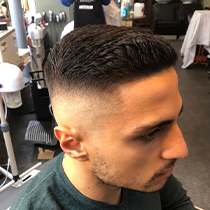 offering a finish that’s clearly demarcated,but is still far from a skinhead.

The low fade starts extremely low, with the skin shaved at the very bottom, and then blending upwards, following the natural curvature of the head. It’s great for hair with more texture, as the hair is often left longer on top for styling.

Who’s it for? – It’s a good option for a more oblong, diamond or triangular head shapes. It can look great with a variety of hair styles. 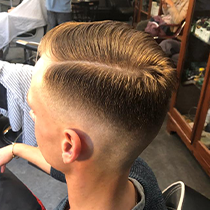 More noticeable than a low fade, but not as scalp-exposing as its high variant, the mid fade is unsurprisingly one of the most popular styles men plump for, and ideal for creating a harder skin-hair blend line should you want to take a more old-school approach to your fade.

The mid fade starts at the point above the ears, making it distinctive, yet still adaptable to different styling approaches. It comes with a lot more styling options where length on the upper sides is needed.

Who’s it for? – The mid fade’s a popular style for all ages, and great when accompanied with a longer beard. Just ensure you use a firm-hold wax (such as Suavecito Firme Hold or Uppercut Monster Hold) to keep your cut neat and under control. 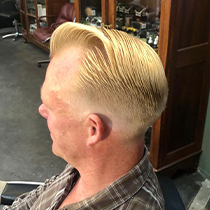 As the Fresh Prince, but bolder, the high fade (also known as a high and tight) is a high-contrast style where most of the hair on the back and sides of your head is shorn back to skin using a foil shaver.

For the high fade, the natural shape of the head isn’t taken into account and a new baseline is created around the area from the upper recession to the lower crown. This results in a highly stylized finish that is not subtle but is sure to turn heads.

Who’s it for? – A popular cut for American flattops and great for Afro hair types. Suitable for someone who doesn’t mind extremely short hair, and perfect for square or round face shapes.

Four Tips For A First-Rate Fade

Now you had your first introduction to the terminology of fades; we would like to leave you with four more tips for you to take to heart. Just because care 😉

Don’t Go on It Alone (Or Cheap)
Resist the urge to save cash by cutting your own hair or opting for a six quid shearing. Always entrust your fade to a quality HEDbarber who has put the time in to learn the art (and it is an art). Although it might seem simple, a fade’s anything but, requiring precise scissor and clipper work and a lot of eyeballing to perfect that graduated look.

Beware Of Bumps
Award season may be a great place to pick up a new hairstyle to try out, but what you ultimately opt for should be informed by more than whatever The Gos is currently sporting. When it comes to a fade, let your scalp play a part in the decision. If you have any conspicuous lumps or bumps in a particular area, then bear that in mind when choosing which style works best for you.

Stay Sharp
Want to keep that expertly blended finish? Then be prepared to visit your barber regularly. “The closer the haircut, the more regular you’ll need it re-cut to keep it sharp and clean,” says Gore. Due to the rate your hair grows at, fades – significantly fades with a lot of scalp exposure like bald and high styles – need to be cut back in every couple of weeks.

Take A Visual
One man’s disconnected undercut should never be another’s Harvard clip , but the right haircuts can happen to the wrong people (just look at the nineties). To avoid this happening to you, if in doubt always show your barber a photo of the style you want as a reference point.

Any cookies that may not be particularly necessary for the website to function and is used specifically to collect user personal data via analytics, ads, other embedded contents are termed as non-necessary cookies. It is mandatory to procure user consent prior to running these cookies on your website.